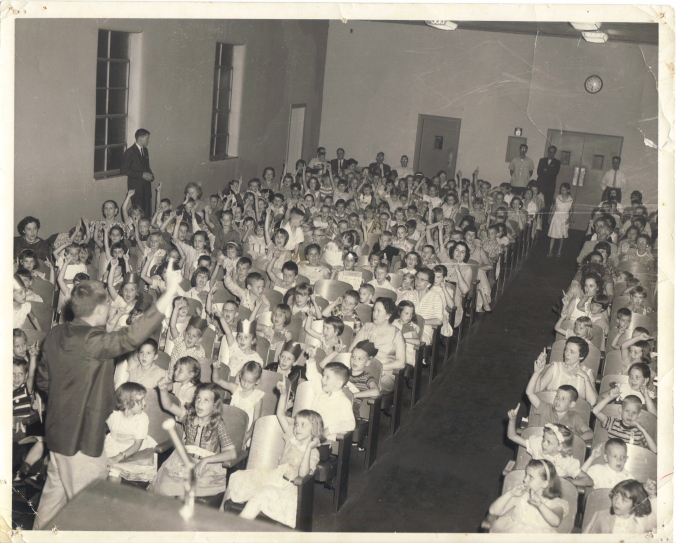 The December 6, 1917 issue of Gospel Advocate was devoted to the memory of the recently-deceased David Lipscomb.  It is a rich treasure of memories and tributes. To my knowledge this issue was the first to carry Lipscomb’s photograph on the cover. Similar covers followed in 1931 (the July 11 Davidson County Special Number) and 1939 (the December 7 special issue about the history of the Nashville congregations).

These three issues are of significant historical value. As primary sources they provide information unavailable elsewhere. As interpretive reflections they are a beginning point for how Lipscomb was remembered and how congregational history was recorded and carried forward. The 1917 issue, other than newspaper obituaries and Price Billingsley’s diary, is the first secondary source about the life and impact of David Lipscomb. The Billingsley diary (housed at Center for Restoration Studies, Abilene Christian University) contains a description of the funeral along with its author’s candid thoughts and impressions. It was not intended, at the time, for public reading.

The issue of the Advocate, however, is a product of the McQuiddy Printing Company and is most certainly intended to capture the mood and ethos in the air just after Lipscomb’s death and by way of the mails deliver it to subscribers wherever they may be. In point of time, it is the first published sustained historical reflection on Lipscomb’s life and ministry. The 1931 and 1939 special issues focus on Lipscomb’s activity on the ground among the citizens of Nashville’s neighborhoods. Here his legacy is as a church planter: an indefatigable, patient, faithful steward. He plants, he teaches, he preaches, he organizes. He observes shifting residential patterns and responds with congregational leadership development. To meet the needs of the emerging streetcar suburbs, he urges elders to take charge of teaching responsibilities, engage evangelists and establish congregations through peaceful migrations and church plants. The 1931 and 1939 issues are testimonies to the effects of this approach. Along the way they preserve details and photographic evidence that is simply unavailable elsewhere. 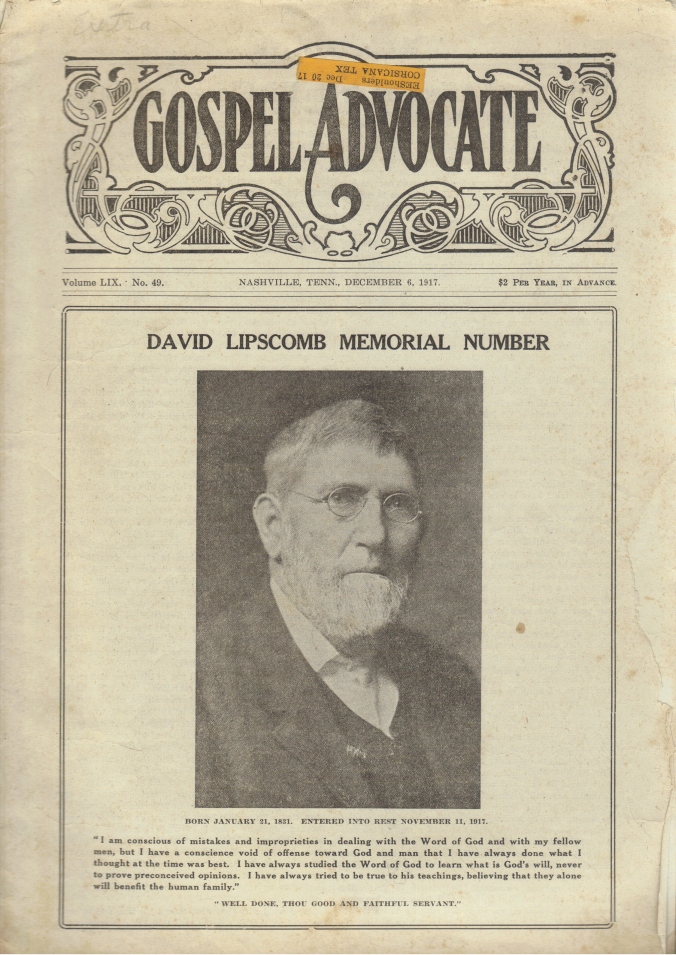 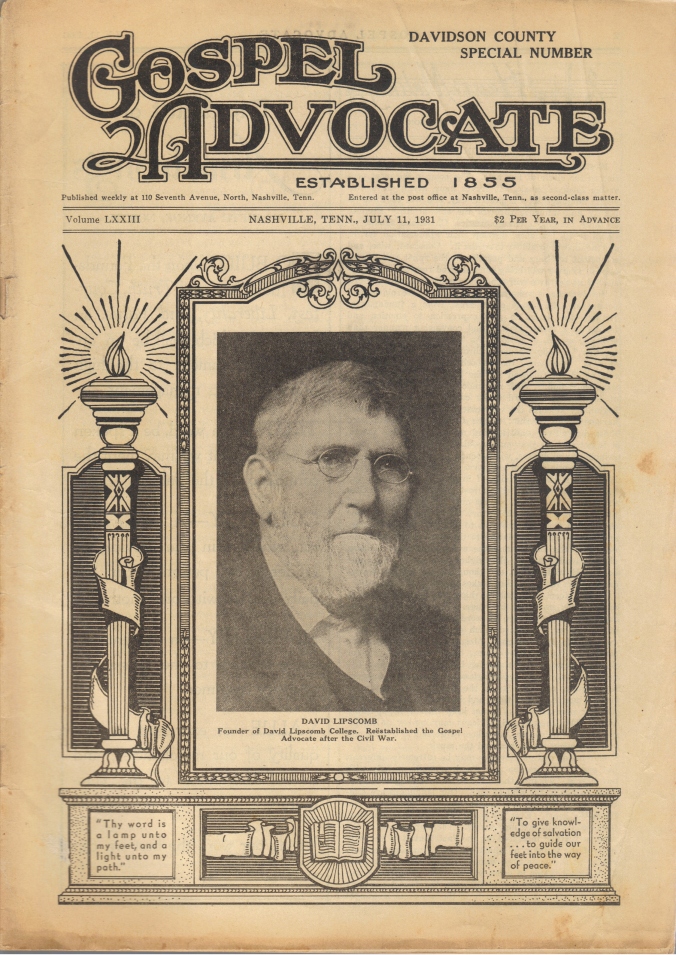 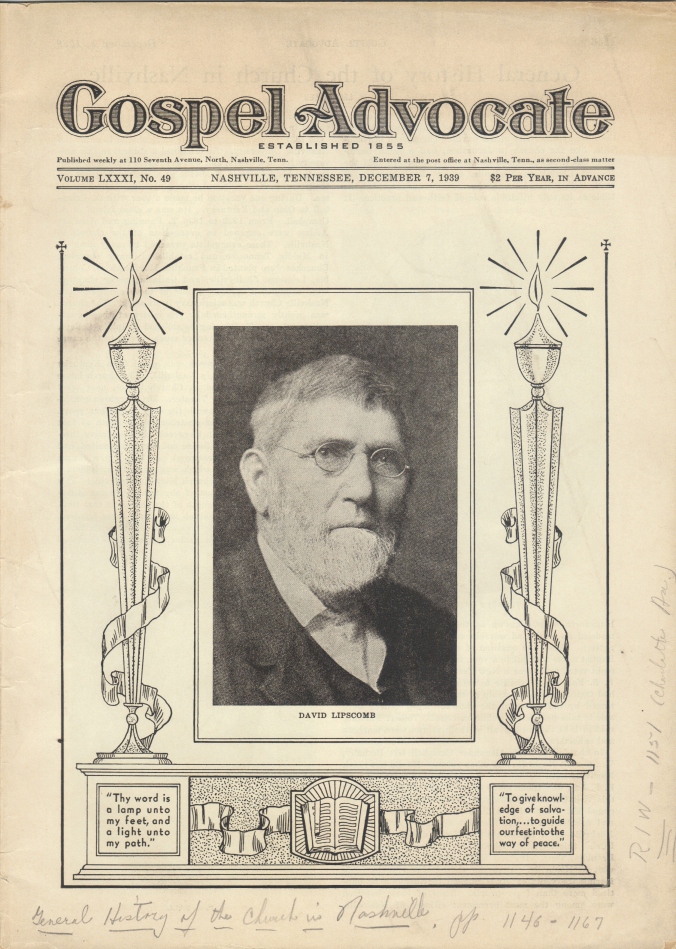 Click here to download the historical sections from the July 11, 1931 special issue about the history of the Nashville Churches of Christ

Click here to download the December 7, 1939 special issue about the history of the Nashville Churches of Christ.

In 1934 Charlotte Avenue Church of Christ published a directory in which they included a brief historical sketch, noting

I have more leads to pursue, but it appears that by 1903-1904 (or as early as the 1898-1901 window according to the directory quoted above) Cherokee Park is an intentional plant from the West Nashville Christian Church (later known as Charlotte Avenue Church of Christ).  West Nashville Christian Church members met at 11:00 am and 7:15 pm.  Several likely also assembled fifteen blocks east, on California Avenue, at 3:30 pm to assist in the new church plant.  A year or two later the young congregation is up on its feet and meeting in the morning and likely carrying on as its own.  I will not be surprised to learn of leadership ordinations in the 1905-1906 window.  A similar plant nearer to North Nashville in the same time frame (1900 to 1910) followed the same practice: meeting at 3:00-3:30 in the afternoon for the first year or two, then moving to morning and evening services.  Were there two plants from West Nashville Christian Church?  Were the same principals involved in both?  Coincidence?  All of the above? None of the above?

When Pennsylvania Avenue Church of Christ closed in 2000 or 2001 the members turned over the property to the elders of Charlotte Avenue Church.  Last I drove by (about two years ago) the brick ‘meeting house’ built in the late 1920’s by Charlotte Avenue housed a Spanish-speaking Pentecostal congregation.

Should anyone have records or documents from Cherokee Park Church of Christ (other variations may include Cherokee Park Christian Church,  California Avenue Church of Christ and/or California Avenue Christian Church) or Pennsylvania Avenue Church of Christ, please contact me.  I would like to fill in the gaps and learn more.  Bulletins, directories, printed materials of any kind, photographs of any kind, meeting minutes or church roll books, recordings of sermons, anything, will enable at least a basic congregational history to be assembled.  It has been almost dozen years since Pennsylvania Avenue Church closed; if records survived, they may yet be saved.  But if living memories are not captured now, we may never get them.  If you know of anyone who worshipped at Pennsylvania Avenue, please contact me as I would like to talk history with them.   Who preached at Pennsylvania Avenue?  Who were the leaders?  Who got things done and what did they do?  What was the shape of ministry there?  Who grew up there?  Who has memory of this congregation?  Email me at icekm [at] aol [dot] com.