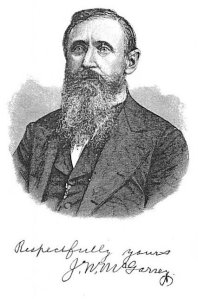 Brother Boles’ reply to my argument from apostolic ex-[page 137]ample is so weak and void of reason that I pass it by with one brief remark.  My argument gives no consequence to the burning of incense.  The ninth chapter of Hebrews plainly says that the censer (in which the incense was burned) was a definite part of the Levitical ritual which was done away in Christ.  Nothing is plainer that this.  We have very definite and positive instruction as to incense.  But singing and prayer and instrumental music were no part of the Levitical ritual–no part of the Mosaic economy–and, hence, were not included in the things which had “waxed old and were ready to vanish away.” Just here I remark that professor McGarvey admits that the early Christians continued to worship in the temple after Pentecost, as they had been accustomed to do before.  And to this agree both Prof. H. B. Hackett, a member of the American Committee of Revision till his death, and Prof. Bernard Weiss, of Berlin University.  So far as I know, there is not a Biblical authority who takes any other position in regard to the matter.  The case is too plain to admit of contradiction.

Any one who is willing to follow the example of the early Christians in the matter of worship in the temple will have no difficulty in knowing just what they did.  To say that they did not attend that same old prayer meeting in the temple to which they had been accustomed in that past is absurd, and would never have been thought of but for the desperate need of an untenable theory.

To sum up, Brother Boles has given twenty-eight commentaries, and what do we find?  Ten of them are neutral–that is, in the comments quoted, they have nothing to say one way or the other.  Only six definitely support the negative.  they are: Adam Clarke, Dr. Whedon, John Calvin, Moses E. Lard, J. W. McGarvey, and Robert Milligan.  I give Lard, not because he says anything against instrumental music, in the passage quoted, but because he was opposed to it, as I freely concede.

Not much here as they have moved away from arguing over McGarvey and are settling in on closing out the discussion.  Boles will not engage Clubb about McGarvey again; Clubb will mention JWM once more.

…J. W. McGARVEY: “To sum up these arguemtns, you can now see that this practice is one of recent origin among Protstant churches, adopted by them from the Roman apostasy; that is was one of the latest corruptionss adopted by that corrupt body; that a large part of the religious world has never accepted it; that, though employed in the Jewish ritual, it was deliberately laid aside by the inspired men who organized the church of Christ; and that several precepts of the New Testament implicitly condemn it.” (“What Shall We Do About the Organ?” pages 6, 7.)

This is the last of fifteen quotes Boles assembles to conclude his negative.  The purpose of the quotes is to establish his case that the history of instrumental music cannot be traced back to the earliest church.  I think Boles’ inclusion of McGarvey as the final quote is a double-whammy of sorts.  It is the final quote of the authorities Boles marshalls to prove his point; it serves to underscore that McGarvey agrees with the authorities.  Furthermore, given the back-and-forth between the disputants on McGarvey’s scholarship, it is rhetorical jab.

…His next reference is to the quotation from the lamented J. W. mcGarvey.  I must say that brother Clubb does himself no honor and his own cause an injury by trying to impeach the scholarship and integrity of brother McGarvey when he says that “McGarvey was not a Greek scholar.”  All know that Brother McGarvey was a Greek scholar, and that he was very careful to state facts in writing his articles.  The venerable W. T. Moore said that he was “regarded as one of the safest and truest men in the church of Christ.” (“The Living Pulpit,” page 325.)  Again, he said: “That which most distinguishes him as a writer and speaker is his clearness; there is never the slightest confusion in his ideas.  he has very little imagination, and relies [105] almost exclusively on facts for effect.”  (Ibid., page 326.)  So it does not matter what brother McGarvey’s son says about his father, nor what any one else may say about him.  the fact still remains that brother McGarvey said: “And if any man who is a preacher believes that the apostle teaches the use of instrumental music in the church be enjoining the signing of psalms, he is one of those smatterers in Greek who can beleive anything that he wishes to beleives. When the wish is father to the thought, correct exegesis is like water on a duck’s back.”

…J. W. McGARVEY is quoted.  Here is what he says: “And if any man who is a preacher believes that the apostle teaches the use of instrumental music in the church by enjoining the singing of psalms, he is one of those smatterers of Greek who can believe anything that he wishes to believe.”  professor McGarvey was my teacher for five years.  I loved him as a father, and I revere his memory.  As most people I know, he was opposed to instrumental music in the [96] worship.  But remember this: He never made it a test of fellowship, as my good Brother Boles is doing.  His son, J. T., said to his father, when he had decided to do to Chestnut Street Church: “Suppose they put an organ in at Chestnut Street, what will you do then?” He answered: “If I cannot find a place where they do not have it, I will worship where they have it.” He went to Chestnut Street because he preferred to worship without the instrument, not because he could not fellowship those who used it.

I do not believe Brother McGarvey would call men like James Moffatt, W. G. Ballantine, Dr. A. T. Robertson, Professor Bacon, “smatterers” in Greek.  These men are among the finest Greek scholars in the world.  Professor McGarvey was not a Greek scholar.  He had only a working knowledge of Greek.  President Robert Graham, a colaborer and lifetime friend of Brother McGarvey, deeply regretted his stand on the music question.  he said to me: “Brother McGarvey made the mistake of his life when he espoused the cause of the opposers of instrumental music in worship.” Robert Graham was  the equal of McGarvey in scholarship.

…J. W. McGARVEY: “And if any man who is a preacher beleives that the apostle teaches the use of instrumental music in the church be enjoining the signing of psalms, he is one of those smatterers in Greek who can beleive anything that he wishes to beleives. When the wish is father to the thought, correct exegesis is like water on a duck’s back.” (“Biblical Criticism,” page 116.)