This week Metro Archives posted to their Facebook page a fine aerial view of the neighborhood north east of the old City Cemetery. It shows the lay of the land in 1936, which is filled with residences in close proximity to each other, to light industry, with sprinkling of local commercial buildings and churches. This photograph captures a moment in time a generation before the encroaching interstate sliced the neighborhood in two, which itself (among other factors) reflected and intensified suburban flight. The object of the photograph was the cemetery as noted on the item itself. This image is from the Walter Williams collection, a fine trove of local photography. And I appreciate seeing the cemetery, but my eye went first to isolate the Howard School complex at 3rd and Lindsley, then with Lindsley Avenue Church of Christ identified, I moved west a block or so, and north a block or so, to locate the former building of the South College Street Church of Christ. In the second image below I lined the street in front of each in green. This photograph is basically oriented facing north. The Lindsley building is directly east of the green line; and South College is west of its green line.

The photograph documents what this neighborhood looked like for much of the first half of the 20th century. This was primary setting for the ministry of the South College Church, led in earnest for forty years by David Lipscomb, and served by a host of evangelists. This neighborhood is the proving ground for the Lipscomb theory of church growth by planting new congregations. All told some 37 congregations came out of South College either directly, or in time by secondary or tertiary ways. To my knowledge all of them were peaceful swarms.

The December 6, 1917 issue of Gospel Advocate was devoted to the memory of the recently-deceased David Lipscomb.  It is a rich treasure of memories and tributes. To my knowledge this issue was the first to carry Lipscomb’s photograph on the cover. Similar covers followed in 1931 (the July 11 Davidson County Special Number) and 1939 (the December 7 special issue about the history of the Nashville congregations).

These three issues are of significant historical value. As primary sources they provide information unavailable elsewhere. As interpretive reflections they are a beginning point for how Lipscomb was remembered and how congregational history was recorded and carried forward. The 1917 issue, other than newspaper obituaries and Price Billingsley’s diary, is the first secondary source about the life and impact of David Lipscomb. The Billingsley diary (housed at Center for Restoration Studies, Abilene Christian University) contains a description of the funeral along with its author’s candid thoughts and impressions. It was not intended, at the time, for public reading.

The issue of the Advocate, however, is a product of the McQuiddy Printing Company and is most certainly intended to capture the mood and ethos in the air just after Lipscomb’s death and by way of the mails deliver it to subscribers wherever they may be. In point of time, it is the first published sustained historical reflection on Lipscomb’s life and ministry. The 1931 and 1939 special issues focus on Lipscomb’s activity on the ground among the citizens of Nashville’s neighborhoods. Here his legacy is as a church planter: an indefatigable, patient, faithful steward. He plants, he teaches, he preaches, he organizes. He observes shifting residential patterns and responds with congregational leadership development. To meet the needs of the emerging streetcar suburbs, he urges elders to take charge of teaching responsibilities, engage evangelists and establish congregations through peaceful migrations and church plants. The 1931 and 1939 issues are testimonies to the effects of this approach. Along the way they preserve details and photographic evidence that is simply unavailable elsewhere. 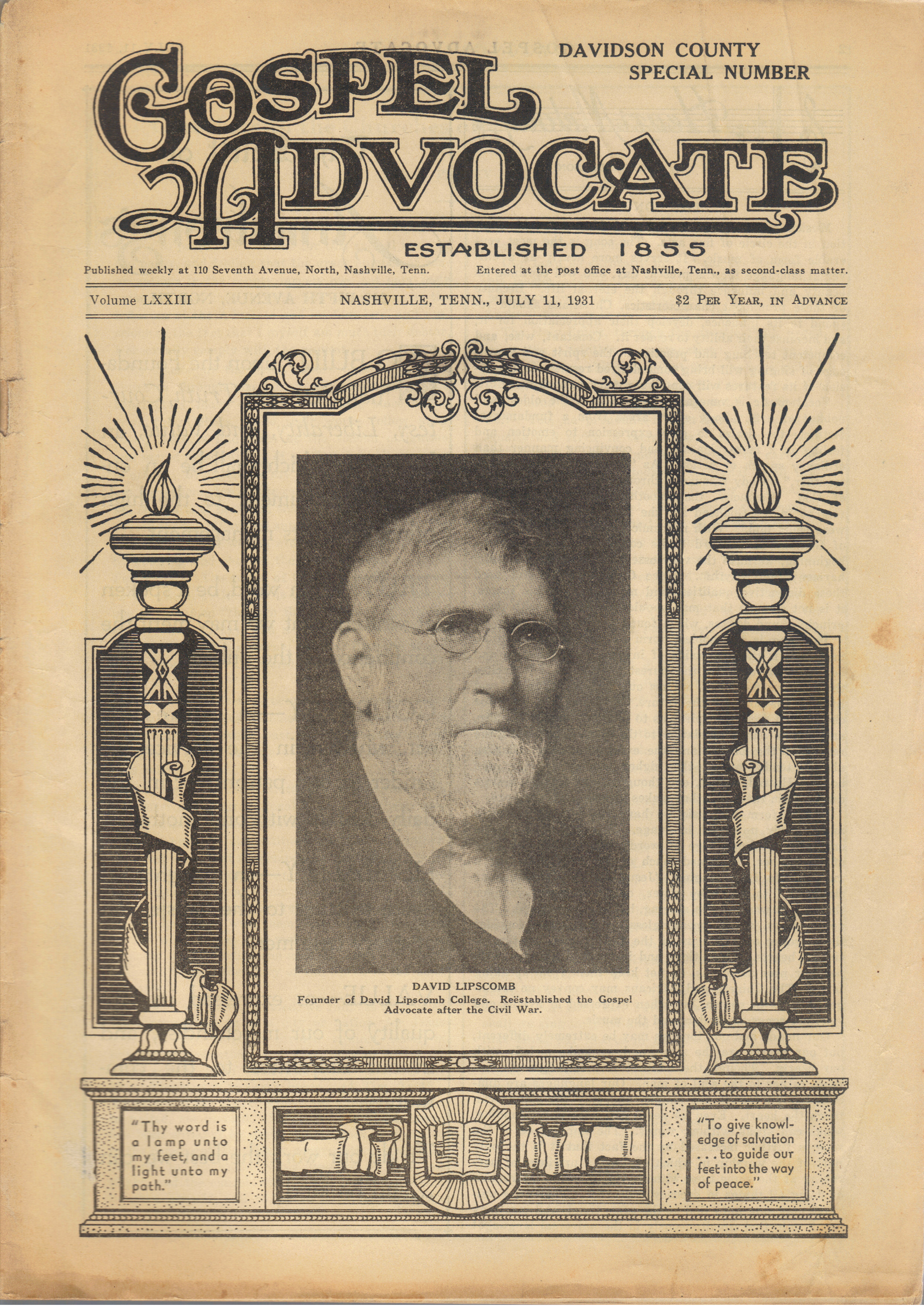 Click here to download the historical sections from the July 11, 1931 special issue about the history of the Nashville Churches of Christ

Click here to download the December 7, 1939 special issue about the history of the Nashville Churches of Christ. 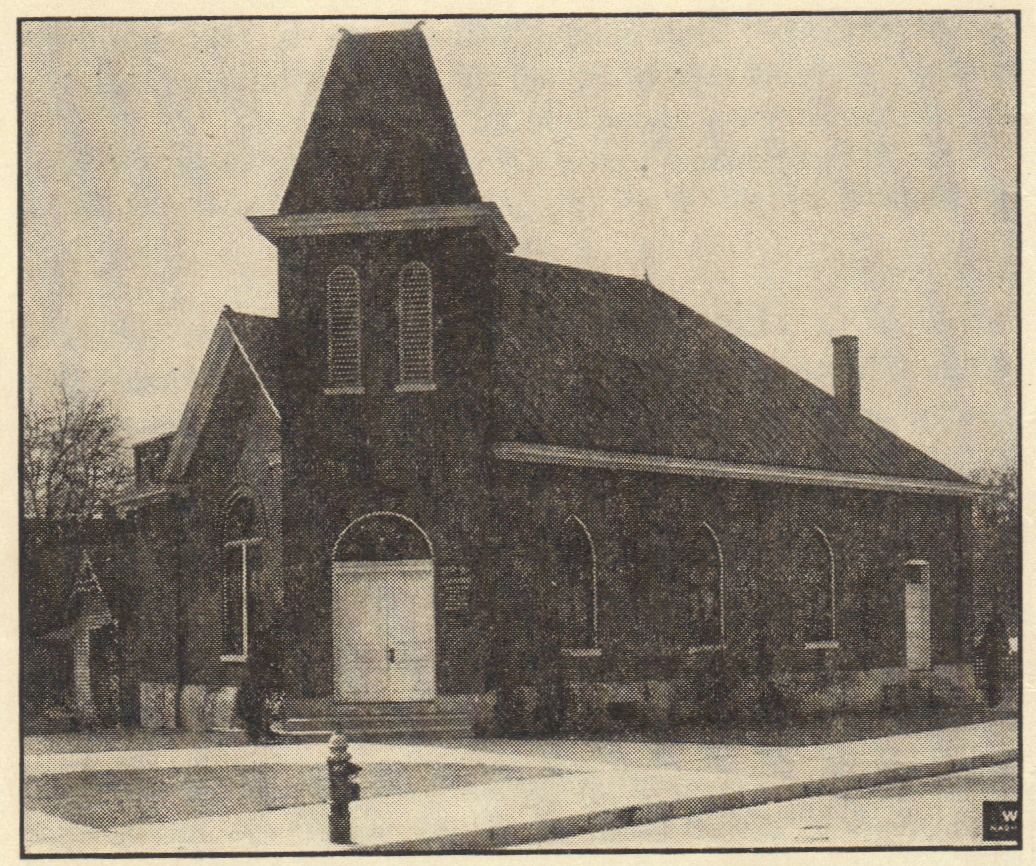 Each of the five churches around which I have worked says the attendance was greatly increased.  In the Buena Vista Community we had five members.  While doing this work I found six others not attending anywhere.  One lady of this community, a teacher in the Methodist Sunday school for fourteen years and whose activity and leadership was responsible for that church’s existence there, obeyed the gospel on the strength of these tracts.  Then her husband obeyed making thirteen members there with which we will begin work in a regular way.

The Church of Christ at 26th Avenue and Jefferson Street, with which I have worked for the past ten years, [110] is now distributing 1,000 tracts per month.  This personal tract each month we believe was in a measure responsible for five baptisms, two restorations, and an increase in attendance such as we never had before.