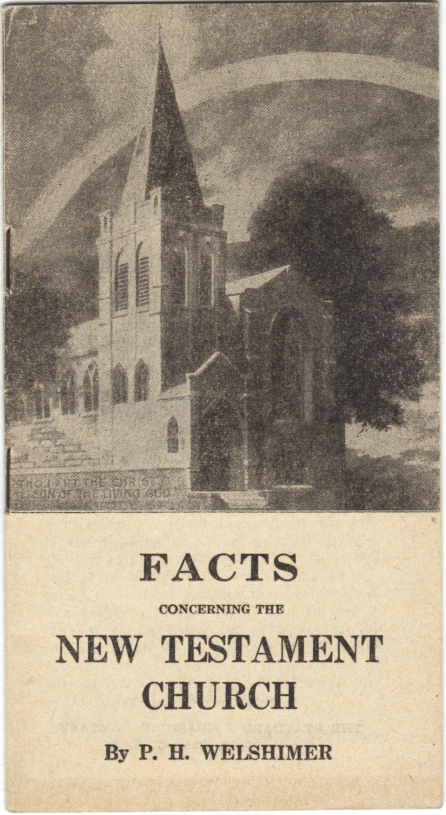 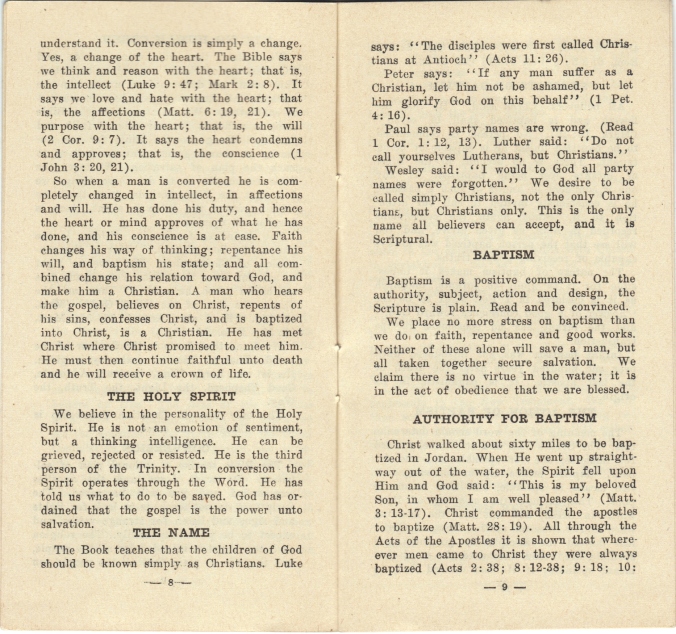 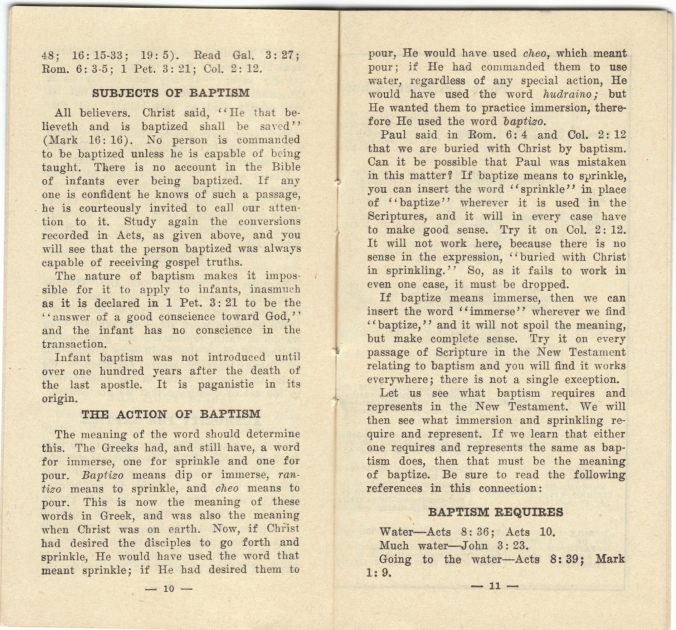 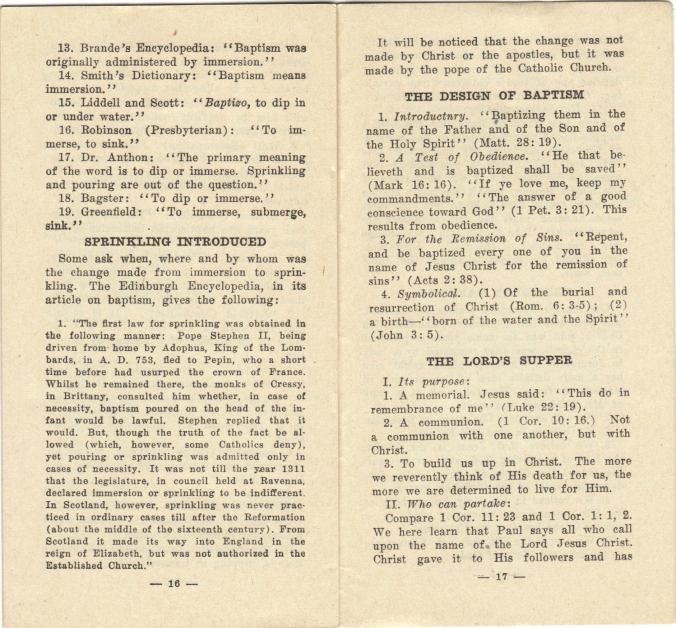 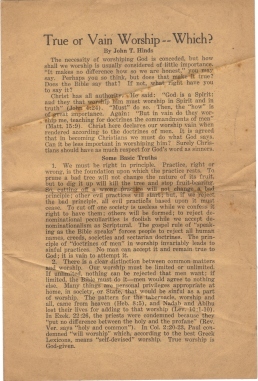 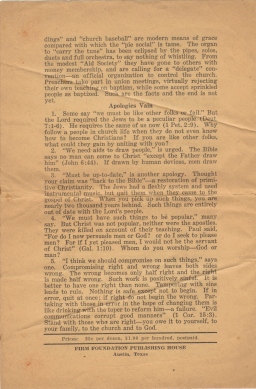 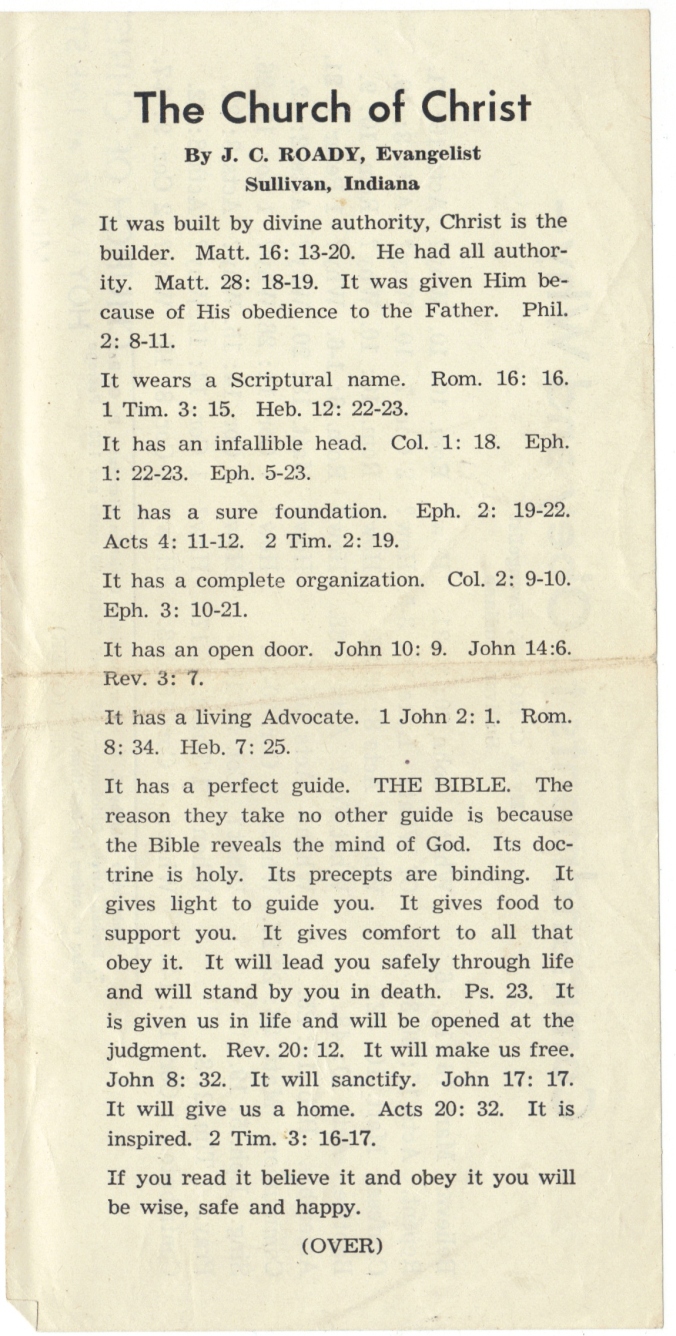 Newsprint broadside, 9 x 11 in, advertisting a series of “10 Gospel Lessons of God’s word” at the Church of Christ, Fisk, Missouri.  Undated.

I see from the Christian Standard index that Isaac Walton Lowman died in about June or July 1924.  One G. Lowman, his child I presume, authored an obituary published in the 19 July 1924 issue of CS at page 1067.  Isaac authored 52 obituaries for the pages of Christian Standard from October 1895 through December 1915.  CS published one notice of his, of some kind, in 1909.  Another about an evangelistic meeting is titled in the index as “Loogootee (Ind.) meeting (from the minister). 1911  1 Ap:542.”  Loogootee, Indiana is a new one to me…with a name like that I would surely remember it.  Perhaps some Hoosier can comment about Loogootee?

Isaac appears, barely, in Christian-Evangelist.  In 1905 he authors “Impression of city campaigns by workers engaged” (page 274) and in 1911 there appears “Our budget” on page 1458.  The latter includes a portrait!

I’ve scoured neither Google nor other print sources for Isaac.  I welcome information, though.  At present it appears he had an active ministry of some twenty years’ duration, some of it in Loogootee Indiana.  Apparently he died after about a ten-year retirement.  Where, if anywhere, he matriculated for ministerial preparation remains unknown.  What other, if any, publications from his pen saw it through a press remains unknown.  Details of the publishing of this tract remain unknown.  For all I know Isaac had it worked up by a job printer and used it in that 1911 “city campaign.”  How Kromer Columbus Ice got his hands on it, and why he kept it, well…who knows?  But he did, and here it is: 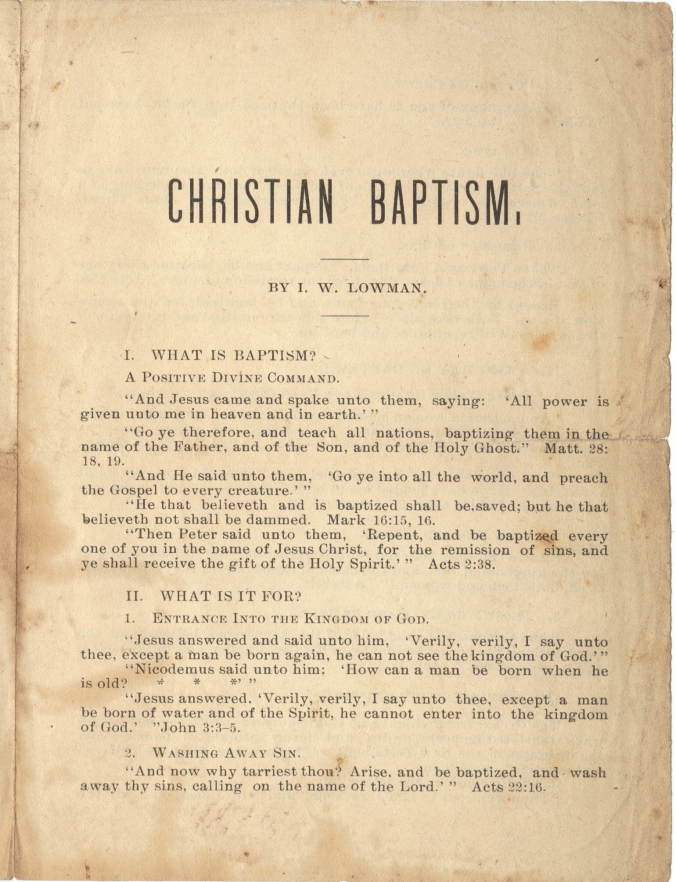 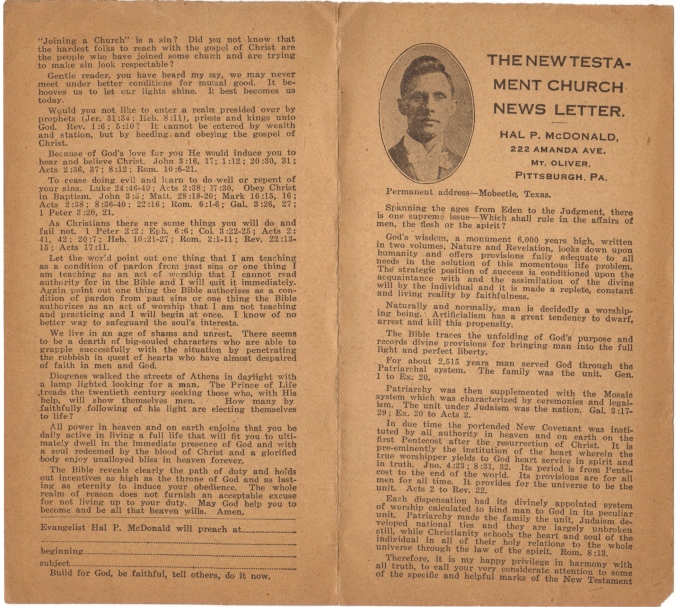 F. L. Rowe is editor and publisher of Christian Leader out of Cincinnati, Ohio.  This broadside tract is undated, ca. 1910’s-1930’s.   Tract theology is underexplored, especially considering how prevalent they were in past generations.  Given the space constraints of tract (or leaflet or broadside) form, they of neccessity must get at the issue quickly while resolving it efficiently.  Among Churches of Christ and Christian Churches tracts are eminently doctrinal and often polemical.  For these reasons they are a very good starting point for historical and theological inquiry into the shape and content of Restorationist doctrinal discourse.  This one is undated, but since Rowe sold Christian Leader just prior to WW2, it must be pre-War.  It gives us a good, brief snapshot view of a pneumatology urged by a conservative Northern publisher from the turn of the century up to the war. Tolle lege!

“Heresy is an act of the will, not of reason; and is indeed a lie, not a mistake; else how could that known speech of Austin go for true: Errare possum, haereticus esse nolo, –I may err, but I will not be a heretic.  Indeed Manichaeism, Valentinianism, Marcionism, Mahometanism, are truly and properly heresies; for we know that the authors of them received them not, but minted them themselves; and so knew that which they taught to be a lie.”

This definition seems well to accord with that of Paul to Titus, iii, 10, 11.  “A man that is a heretic after the first and second admonition, reject, knowing that he that is such, is subverted, and sinneth, being condemned of himself.”  A heretic, according to Paul, is a factious person, one that foments parties, and division.  Rom. xvi, 17, “Mark them that cause divisions among you contrary to the doctrine ye have learned, and avoid them.”  Now it is well known that the doctrine of Christ enjoins unity and leads to it.  But the man, who teaches for doctrine the commandments of men, or his own opinions for truth; and makes these terms of Christian fellowship, and by this means creates and foments partyism and division, what is he, but a heretic?       EDITOR.

Thanks to the magic of Google books, it appears Stone quotes from, ultimately, The Works of the Ever Memorable Mr. John Hales of Eaton, now first collected together, in three volumes. Glasgow, 1765, vol. 1, pages 125-126: page 125: the quote begins on the last line: Perhaps Stone quotes from a secondary source; I note from Google Books that a handful of later publications use this same quote from Hales. Nevertheless, his point is that personality drives heresy. Heresy is not limited to an erroneous understanding or conclusion, or even teaching, of or about doctrine. Heresy is gathering a following, or witholding or withdrawing fellowship from other beliivers over positions that originate in personal opinion. In other words, you have to agree with me or you’re out. Heresy is not, quoting Hales, a mistake, but a lie.  Furthermore, it is a lie told in service to self…to build me and my group.  Heresy’s driving force?…pride, arrogance, presumption.  Stone’s note appears in The Christian Messenger, January 25, 1827 page 66.  For Hales’ works, go here.